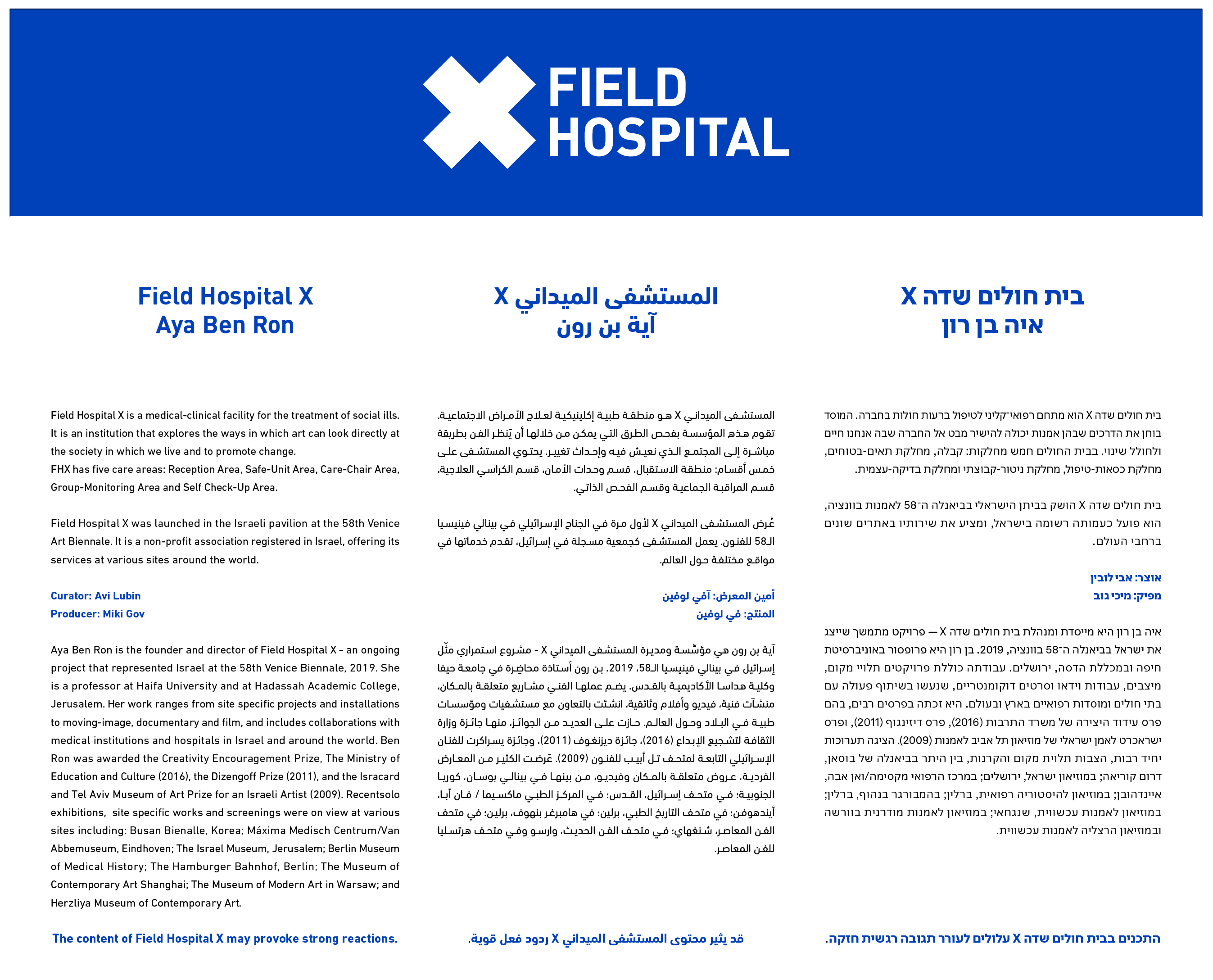 FHX ONLINE GIVES YOU ACCESSIBILITY TO FHX FACILITIES FROM HOME

Price: 50₪ (the payment is a contribution to FHX activities)

For the best experience: Use a computer/tablet with high quality headphones. Find a quiet room where you will not be interrupted. Use a stable and fast internet connection.

Your entire visit is accompanied by FHX Director Aya Ben Ron (in Hebrew) and is composed of three stages:
› Learn how to produce a SELF-CONTAINED SHOUT so that your voice will always be ready to respond to any challenge you may face.
› Watch one of FHX CARE-KITS: A short video by an invited artist, telling a personal story and revealing a social injustice. The video is followed by two Second-Opinions by FHX experts.
› FHX INTENSIVE CARE: In-depth acquaintance with FHX goals guided by Avi Lubin; Q&A

→ Book your visit according to the Care-Kit you’d like to watch (all care-kits with English subtitles):
NO BODY (2017) by Aya Ben Ron is a video about abuse in the family. After many years of silence, she tells her story in her own terms. In a combination of video and animation, and the structure of a fairytale, Ben Ron confronts her childhood trauma. This video is Ben Ron’s testimony.
BLOCK OF CLAY (2019) is a video by artist ROEY VICTORIA HEIFETZ and filmmaker ZOHAR MELINEK EZRAH. In her monologue, Roey Victoria talks about feelings of alienation from her own body, and the many years of not admitting her true gender. She reveals herself to the camera, while in the process of gender transition. The viewer’s gaze moves around her body from different angles, closer and farther away, showing all the flaws and weaknesses of the body.
INSTITUTIONAL ABDUCTION (2019) tells the story of three Mizrahi mothers whose babies were abducted from them shortly after birth. These stories would later become known as “The Yemenite, Mizrahi and Balkan Children Affair,” depicting the institutional kidnapping and forced disappearance of thousands of babies and toddlers from migrant families in Israel, mainly in the 1950s. To this day, these mothers do not know what happened to their children, and their claims against the state are still ignored and silenced.

In 2019, artist Aya Ben Ron launched Field Hospital X at the Israeli Pavilion at the Venice Biennale. Operating as a non-profit organization, the hospital is a (physical, conceptual, and virtual) space that allows people to talk about traumas and the social injustices that afflict them. It is a way to think of art as a space of care and attention, which encourages visitors to be empathetic, attentive, and aware of what they are witnessing. The question Do You Care? is a motto of FHX. 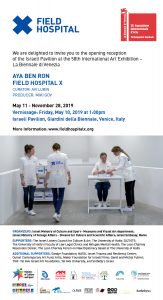 Field Hospital X | Aya Ben Ron
by Avi Lubin
Field Hospital X (FHX) is a new project by artist Aya Ben Ron. It is a mobile, international institution, an organization that is committed to researching the way art can react and act in the face of social ills. Learning from the structure and practice of hospitals, health maintenance organizations and healing resorts, FHX provides a space in which silenced voices can be heard and social injustices can be seen. It launches at the Israeli Pavilion at the Venice Biennale, and from there it will travel to various sites around the world, develop and expand.
Over the years, Ben Ron’s work has dealt with ideas about healing, repair and rescue; delving into the essence of medical ethics, and challenging the relations between caregiving and receiving care.
In 2003, Ben Ron created First Aid, a concertina book and a black and white booklet, using the instructions from an official Israel Defense Forces handbook, taking them out of context and recombining them. The booklet also contains drawings based on illustrations of evacuations of civilians and soldiers. IDF soldiers have reappeared in her work Patterns (2002), which combines drawings of soldiers demonstrating the Fireman’s Carry technique together with arabesque tiles, composing a geometric pattern.
Ben Ron’s practice includes collaborations with different medical institutions and hospitals in Israel and around the world. A Voyage to Cythera (2012), for example, was an intervention in the permanent collection of the Berlin Museum of Medical History at the Charité (curators: Thomas Schnalke and Galit Eilat). Ben Ron created a voyage in the museum collection where visitors pass through 18 stations, telling an alternative story about the lives of patients whose organs are preserved in glass jars and stored on shelves. Another example is Shift (2009-2011), a documentary about patients in a persistent vegetative situation (coma), shot at the Head Injury Department of Reuth Medical Center in Tel Aviv. The video follows the daily routine of the patients, their families, and care staff over a period of two years. Rescue (2012, The Israel Museum, curator: Aya Miron) includes a suspended steel sculpture and a video in which Ben Ron, dressed as a nurse, is strapped onto a stretcher and hung upside down in mid-air. The rescue procedure was guided by the Head of Patient Safety at Hadassah Medical Center Jerusalem, and the director of Israel’s emergency medical services training department.
In 2017, Ben Ron created No Body, a video about abuse in the family, that tells her personal story after many years of silence. In this video, Ben Ron shifts the gaze directly to her own childhood trauma. This shift has an important influence on the way we can retroactively understand her body of work as a personal testimony, and read her continuous interest in the power relations between physicians and patients as a metaphor for the relations between parents and children. It also marks an important transition in her artistic practice from working from within the wounded body, from personal post-trauma, to a public option for healing. In this sense, the confrontation with the trauma in No Body is what has led to the establishment of Field Hospital X. It is interesting to note that even though Ben Ron herself appeared in some of her previous works, she always portrayed a character, usually that of a nurse. In No Body she appears as herself, and not as a character, yet as an animated figure who is drawn frame by frame (rotoscopy) on filmed scenery.
FHX begins a new path where Ben Ron is neither the nurse, nor the protagonist, but rather the director of a hospital that operates as an independent institution, in reality.
When visitors enter Field Hospital X they are patients, recipients of care. They take a queue number and wait in the Reception Area. When their number is called, they go to the reception desk and choose a Risk-Wristband. In the Reception Area, they watch the FHX TV Program, where they are told to “be patient; be a patient.” Then, they are invited to enter a Safe-Unit and learn how to produce a Self-Contained Shout. Afterwards, they sit on a Care-Chair, where they can personally view one of the FHX Care-Kits, which presents a short video by an invited artist, confronting a social ill through a personal story. On the Care-Chair, the visitors are put in a double position: on the one hand they are seated on the Care-Chairs like patients and are receiving care by FHX staff; on the other hand, they become the caretakers, who are invited to truly listen, to form an opinion, and to care.
In the Care-Kit, after the short video, visitors may watch Second-Opinions by FHX experts. Second-Opinions have two different roles. Through them, visitors can open up to a new perspective, get more information and hear a different point of view about what they just saw. In addition, Second-Opinions help to break the speechlessness and the silence that often surround stories about personal trauma, giving words to what is usually unarticulated, and helping the visitors to speak out.
Through Field Hospital X, Ben Ron creates a space that enables people to talk about their traumas, and the social injustice that affected them. It is a space that gives the opportunity to speak without being subordinated to the expectations of the legal system, the media and the public atmosphere.
In FHX, art is not abstract and ambiguous, but rather takes a stand. FHX enables people to talk about their own trauma in their own terms, and encourages the visitors to care, to listen and to see what is happening in front of them.